My turn. Heather tried the "Very Simple Spelt Bread" recipe and said it wasn't that bad. I finally tried it and hated it. Not sure what I did wrong, but I couldn't eat the bread. It was dry, WAY to heavy and tasted strongly of baking soda. It was aweful!!
I did a few variations - is that what happened to this recipe? I used flaxseed rather than sesame seeds, I threw in 1 teaspoon of xanthan gum, and used honey rather than molasses. So? Any ideas? (Although, even if you have ideas, I might not try this recipe again.) It went bad really fast, too.
I think our cows enjoyed it, so the bread didn't totally go to waste.

Here is the photographic evidence that I really made the bread: 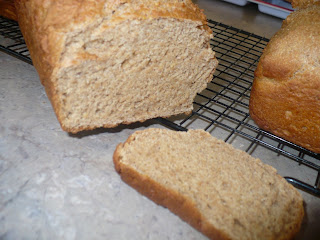 It kind of looked like pumpkin bread when it came out of the oven: 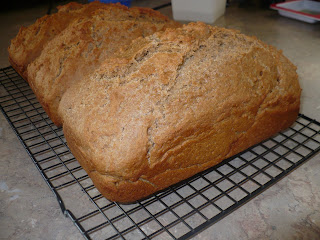 Now, on a happier note, I got a phone call recently, and was asked if I had any friends who might want to share a 40 pound brick of cheese with me. It was a steal of a deal, so I said I would call around. Everyone I talked to wanted in on the deal. So we got this 40 pound brick (which turned out to be closer to 44 pounds) and learned a lot about cutting cheese with a 16 gauge guitar string into 5 pound loaves. (The 16 gauge worked really well, by the way.) We wrapped each brick in saran wrap. (How do like that Sam's Club roll of saran wrap? It lasts us like 10 years - I love it!) 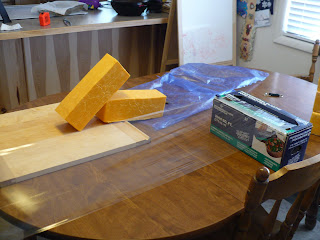 And here is the final stack (minus one). It was awesome to have that much cheese on my kitchen table.
I love a good deal! 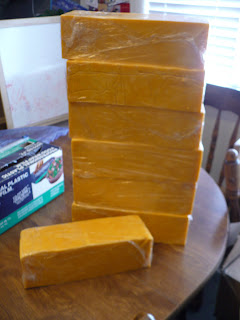 What? call me next TIme PLEASE! WE ALMOST LIVE OFF OF CHEESE IN THIS HOUSE!!!

I totally want in on the cheese deal! Where did you get that from??? Cool!

As for the bread........? Don't know about the baking soda taste? Mine was a bit bland, but I think the steel cut oats gave it nice chewy texture- it was pretty good w/dab of butter & honey- but if left plain somewhat bland. Sorry it didn't work out for you! Maybe try it again w/the raisins & cinnamon? I don't know...

I'm sure you've figured out my secret identity by now ;)

That's a LOT of cheese! Are you familiar with cheese wax? http://tinyurl.com/cwxjym
It will store your cheese for up to 25 years! Then even in the event of an emergency we can still enjoy it :)

How did you find this cheese deal? I am pretty sure you are not in my area, but I would like to know how I can go about finding bulk cheese to buy.
Any advice?

We found it though a local dairy that happens to get some of their cheese back and sells it locally... that may or may not help.

I want in on the cheese deal too please! While we are on the subject of cheese, do you know anything about feta cheese? It keeps for quite some time but after a while starts to get smelly and a bit runny. Is there anything I can do to keep it fresher for longer, and is it normal for it to be smelly? Any help on its storage is appreciated.

Thomas - I don't know much about feta, sorry. I know it is a little smelly from the brine it sits in. And I've been able to keep some for several months at a time. But that is about the extent of my feta knowledge. Good luck.

I want in on the cheese deal too please! While we are on the subject of cheese, do you know anything about feta cheese? It keeps for quite some time but after a while starts to get smelly and a bit runny. Is there anything I can do to keep it fresher for longer, and is it normal for it to be smelly? Any help on its storage is appreciated.

What things are most Important to Store?

Get to know me better - brought to you byTwitter

Promote Your Page Too

Just a little about me:

Hi. My name is Jamie. First, thanks for stopping by.
I am a wife, mom, farmer and entrepreneur. I love to learn and create new things. This is my blog dedicated to something I am a little passionate about - food storage and since we farm, I'll do my best to keep you up-to-date about what is really going on in the food markets.

What is your most important reason for shopping at a farmers market?

What is your SECOND most important reason for shopping farmers markets?

Questions About Spelt or Food Storage?

Please contact me and ask your questions... I love to get to know my blogging friends better.

Learn a Little More About Me

Be prepared and have a food storage of essential foods, clothing, fuel, and water to help us during times of personal and natural disasters. You never know when one will hit.

Use their 10 baby steps to get started

after cooking, cleaning, and doing all the things you need to do, take care of your hands and quickly rejuvinate them with this skin cream.