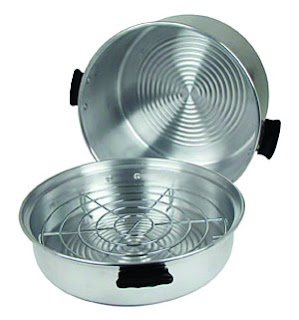 So, after I created and went live with my canning page and products, I started hearing rumors that these steam canners are not recognized as safe in most states.

Utah used to recognize them as safe and I think they were the only ones, but now I understand they have restated their position.

Some of the benefits of steam canners are promoted to be:
less time to pre-heat
less water used
cannot boil over
saves energy
less time to return to a boil after jars are placed on the rack


I've been discussing the issue with the University of Idaho Cooperative Extension System. Here is their position:

"There are some major problems with the use of steam canners for canning acid foods:

* Cold Spots: may occur due to pockets of air trapped between jars or under the dome. The temperature in these cold spots can be below 212 degrees F.

* Release of steam may occur if heat is maintained under the canner at too high a temperature. The increased pressure may build to a level high enough to life the lid off, allowing much of the steam to escape and cool air to enter reducing the termperature.

* Increased jar breakage may occur since jars are not separated bya rack in the canner.

* Underprocessing may occur because home canners may not be able to differentiate between steam and an air-steam mixture. Water begins to give off a vapro, which can be mistaken for steam, at tempreratures as low as 170 degrees F.

* Uneven heating may occur since jars are not separated by a rack in teh canner. Jars may be jammed next to each other so the steam cannot equally penetrate the jars from each side.

* Steam burns may occur since it is difficult to remove the dome cover safely.

The USDA Center for Excellence in Food Preservation has conducted research on steam canners. They found the maximum temperature of the product being canned was significantly lower in products canned in steam canners than in the same food canned in a boiling water bath. The lower termperature resulted in less killing power of bacteria, underprocessing and considerable risk of ecomonic spoilage. The USDA and University of Idaho do not recommend the use of steam canners for hom canning of acid food."

(And low acid foods should be pressure cooked/canned.)

So, even though it is a great concept, it seem to have some flaws. If you are thinking of purchasing a steam canner, you might reconsider for the safety of your food and most importantly, your family.

I am pulling the steam canner page from my site. I'll start looking for someone who can wholesale me a quality water bath canner.

Until next time...
Jamie

Information is power.
Posted by Jamie at 2:46 PM

I am glad you put this up here because I was recently given one and now I won't worry about figuring out how to use it.

Hi, I know nothing about canning yet (was surfing to learn) and wanted to let you know of this quote I read on Amazon when I searched for Water Bath Canner... "The USFDA does not reccommend this type of canning for foods with low acidity"

What things are most Important to Store?

Get to know me better - brought to you byTwitter

Promote Your Page Too

Just a little about me:

Hi. My name is Jamie. First, thanks for stopping by.
I am a wife, mom, farmer and entrepreneur. I love to learn and create new things. This is my blog dedicated to something I am a little passionate about - food storage and since we farm, I'll do my best to keep you up-to-date about what is really going on in the food markets.

What is your most important reason for shopping at a farmers market?

What is your SECOND most important reason for shopping farmers markets?

Questions About Spelt or Food Storage?

Please contact me and ask your questions... I love to get to know my blogging friends better.

Learn a Little More About Me

Be prepared and have a food storage of essential foods, clothing, fuel, and water to help us during times of personal and natural disasters. You never know when one will hit.

Use their 10 baby steps to get started

after cooking, cleaning, and doing all the things you need to do, take care of your hands and quickly rejuvinate them with this skin cream.